NASHVILLE, TN – (March 27, 2014) – Award-winning duo Florida Georgia Line, in partnership with Sixthman Ltd., announced the first ever “This is How We Cruise” music festival at sea, and they are bringing along their friends multi-platinum superstar Nelly, hot newcomer Thomas Rhett, Colt Ford, The Cadillac Three, Canaan Smith and Chris Lane. Artists will perform on multiple stages throughout the ship as well as host activities, intimate fan experiences and live on-stage collaborations aboard the Norwegian Pearl from November 8-12.

The record-breaking duo is riding high as their latest single, “This Is How We Roll” featuring Luke Bryan, has been officially certified GOLD for sales exceeding 500,000. The song is from the deluxe version of their chart-topping, PLATINUM-certified debut album HERE’S TO THE GOOD TIMES (Republic Nashville).

FGL has exploded since releasing four consecutive, multi-week #1 smashes in the US and Canada with the PLATINUM-certified hits “Stay,” “Get Your Shine On,” “Round Here,” and 6X PLATINUM “Cruise,” whose sales are combined with the remix featuring Nelly. Breaking the record for longest #1 on Billboard’s Hot Country Songs Chart, “Cruise” has sold nearly 6.8 million downloads in the US alone and is the best-selling digital Country single of all time according to SoundScan.

The unstoppable duo is currently on the road as direct support for Jason Aldean’s NIGHT TRAIN Tour and will turn up the heat with their headline run – THIS IS HOW WE ROLL SUMMER SERIES 2014 – featuring special guest Nelly and opening act Chris Lane. For tour dates and more, check out www.FloridaGeorgiaLine.com. 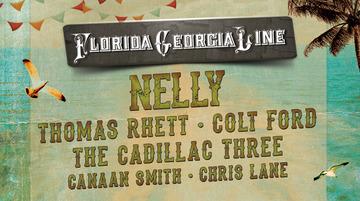 ABOUT SIXTHMAN: Sixthman, headquartered in Atlanta, Georgia, creates festivals at sea designed to set the stage for moments that make life rock! Since 2001, we have been pioneering themed cruise experiences for bands, brands, and their fans and are proud to be celebrating our 11th year and the accomplishment of executing 45 full ship charters, hosting over 85,000 guests for nearly 400,000 days on vacation at sea with world class artist and brand partners such as KISS, Kid Rock, John Mayer, Lynyrd Skynyrd, 311, Zac Brown Band, Lyle Lovett, Barenaked Ladies, Sister Hazel, Turner Classic Movies, VH1, along with engaging festivals such as The Rock Boat and Cayamo. INC Magazine recognized us as America’s Fastest Growing Travel Company and the 87th fastest growing company across all segments on the INC 500 List.