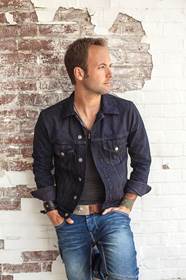 Toronto, ON (September 9, 2014) – Fresh off a slew of notable festival dates, including an outstanding headline performance in front of 25,000+ fans at Boots And Hearts Music Festival, PLATINUM selling Country star Dallas Smith revealed the dates for his 2015 cross-Canada headline tour today.  The highly anticipated “Tippin’ Point Tour” kicks off in Fredericton, NB on January 15th and will hit over 20 cities early next year.

The official tour announcement comes on the heels of what many are calling the “performance of the night” at the 2014 Canadian Country Music Association Awards (9/7), where Smith was nominated for Single of the Year, Album of the Year (Tippin’ Point) and Male Artist of the Year.  Smith literally rocked the stage in Edmonton with his performance of the record breaking, PLATINUM selling single “Tippin’ Point”.

During a private industry and radio event held last Friday night in Edmonton, Paul Tuch, Director of Canadian Operations for Neilsen/BDS presented Smith with an award in celebration of his achievements and a Canadian first at radio where all 8 of Smith’s country singles have reached Top 10 on the chart – proving again that he is one of country music’s leading performers.

Responding to the overwhelming demand from radio and fans, Smith has been hard at work recording the follow up to 2012’s breakout country debut “Jumped Right In”, which produced a GOLD single and garnered five 2013 CCMA Award nominations and a 2013 JUNO Award nomination for Country Album of the Year.  Smith reunites with 2014 CCMA Award winning Producer of the Year, Joey Moi (Florida Georgia Line, Jake Owen), for the yet untitled album that is due out later this fall.

“I can’t wait to share these new tracks with everyone,” says Smith. Joey knows how to get the best out of me and I’m looking forwarding to performing the new songs live for fans.”

Joining Smith on the “Tippin’ Point Tour” for select dates (noted below) are two of Country music’s brightest new stars – classic rock-infused Kentucky twosome Sundy Best – chosen as one of Rolling Stone’s “10 Bands You Need To Know”, and Nashville based singer-songwriterCharlie Worsham who is fresh of the road with Brad Paisley.

For more information on Dallas Smith and a complete list of tour dates, visit DallasSmithMusic.com

November 8-12 – This Is How We Cruise Tour w/Florida Georgia Line – Miami, FL