If Chris Lane isn’t on your radar, he should be. The North Carolina native has earned the praises ofsomeoftoday’shottest country stars and has truly made a name for himself as a serious artist to watch. His journey to country stardom is an interesting tale to tell. “Unlike a lot of artists, I didn’t grow up playing music,” Chris says. “I actually grew up playing football and baseball with my identical twin brother and for as long as I can remember, we both wanted to play ball professionally. That’s ultimately what I thought
my career would be after college,” he says. After having to undergo several knee surgeries, things took a turn for Chris. “That really hurt my chances of playing,” he says. “My twin brother actually got drafted to play and ended up turning it down, which is crazy, isn’t it? He ended up joining me with the whole music thing.”

Though some would use their post-surgery downtime to catch up on Netflix’s latest releases, Chris opted for a more musical approach.

“I started learning how to play gui- tar,” he says. “After my brother and I graduated college, we moved back home and started helping my dad do landscaping for a living. At that time, I was really digging in on the guitar and started practicing being able to sing at the same time.”

After nailing that skill, Chris went on to form a cover band in his hometown. Three years into that, crowds started getting bigger and bigger for Chris’ gigs. “That’s when I decided to start writing my own music,” he says. “I didn’t have any clue where to begin because I had never written a song before, but throughout a period of time, I ended upwriting12.”Notbadfora first- time songwriter, right?
After having a buddy record the tracks, those 12 songs flour- ished into a self-released project. “I continued building up a following
in North Carolina, South Carolina, Florida, Georgia, and just tried branching out from there,” Chris says. “That’s when Nashville
started taking notice and people started fly- ing out to watch me play. That’s how I ended up in Nashville, at Big Loud Records.”
Now, Chris is continuously climbing the country charts. “I just released my debut EP and my single, ‘Fix,’ on country radio,” he says. “I spent 21 weeks out on a radio tour and it just felt great. The song is ac- tually in the top 30 and seeing all my hard work paying off has just been so rewarding.” All that hard work eventually led Chris to break records with his lead single, accumulating the most first week single adds from a debut male artist.

Still, even with such deserved success, Chris admits this is all new territory for him. “I’ve never had music out before where people are listening and singing at the top of their lungs,” he says. “It’s new to me and I’m loving it. I’m excited about everything going on and everything that’s still to come.” 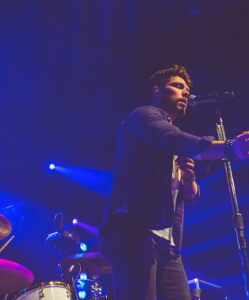 Crafting his own niche sound was a collaborative effort between Chris and his team. “I was about five or six songs deep on the EP and was
basically finished with it when we decided to go in a different direc- tion,” he says. “My producer had heard me sing a high falsetto part, from an Usher song, and he just stared at me and was like ‘What was that?’ He wanted me to explore that sound but we didn’t really have any songs that would allow me to do that. So, a week later, my manager called and said he had a song called ‘Fix’ that he wanted me to listen to. When I heard it, I loved everything about it. I love songs that make you want to move and dance and that song definitely did that for me.”

Taking on this new direction meant stepping out of his comfort zone, something a lot of artists are nervous to do. “Once I got in the vocal booth, I felt a little intimidat- ed because I had only been joking around before with the falsetto,” he says. “But everyone was so pleased with the way it turned out that we just decided to start from scratch and continue in the direction of ‘Fix.’ I’m not always the most patient person but I’m so glad that I waited or I would’ve never ended up with this song, which I truly love. When I perform it live, I’ve gotten very comfortable with it that I don’t really get nervous to use that side of my voice anymore. The more I do it, the stronger I feel with it.”

He’s not the only one who loves the tune. In fact, the ‘Fix’ music video has racked up almost a million views to date. “I really wanted the vibe of the video to match the sound of the song,” he says. “It was so much fun to make and I feel like we really captured what we were trying to capture. It was my first time working with the director, TK McKamy, and he definitely made it a good time.” The song, which became one of the most shared tracks on Twitter in the U.S. from an up-and-coming artist, earned Chris some big-time shout outs from celebrity fans like Florida Georgia Line, Lucy Hale, Brett El- dredge and more. “That’s the beautiful thing about country music,” Chris says. “Everybody is always so supportive of everybody . Florida Georgia Line and all the other artists who have given me a shout out are all people that I look up to and have formed friendships with over these last few years in Nashville. It’s always cool to have your friendships sup- porting and shouting you out.”

Once Chris’ full EP went live, more country lovers started taking notice; CMT even selected Chris as one of the 16 artists included
in their LISTEN UP “16 for 2016” campaign. ”I was so excited when I found about that,” Chris says. “I think I screamed a whole lot and
ran around my house. I’m certainly honored by it, for sure. It’s such a boost for me.”

Keeping the momentum alive, Chris joined Dustin Lynch’s Hell of a Night Tour, which ended its run in February. “Tour life was amazing,” he says. “People showed up every night and sang along. I even got a lot of sweet gifts from fans, which I thought was awesome because hav- ing those types of connections was also new to me. Of course, another amazing part of the tour was Dustin; he always made sure that we were taken care of every single day. The best part for me, I think, was getting to walk off stage every night and standing on the side to watch him perform. He’s really a great perform- er and such a great friend.”

After Chris’ tour run wrapped, he joined a very elite group that up-and-coming country stars dream about their entire lives: he made his Grand Ole Opry debut. “I was so ex- cited,” he says. “I was also a nervous wreck, no doubt about it. All the greats have played on that stage and I was just very blessed to have been asked to be apart of that night.”

With 2016 only four months in, some would say that Chris has already achieved a whole lot this year. However, the country crooner has a lot more on his to-do list. “I think my main goal for this year is to get my record out,” he shares. “I’m currently trying to finish that but, for now, I’m just excited to see where “Fix” takes me. I’m hoping to get another single out soon, get on another tour, and just see what happens from there.” NKD