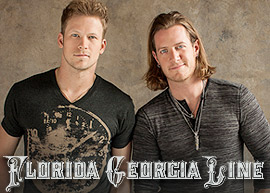 Florida Georgia Line were recently featured in an article by the Indianapolis Star talking about their upcoming tour with Jason Aldean hitting major baseball stadiums in Cleveland, Cincinnati, Washington, D.C., Pittsburgh and Philadelphia.  Check out the full article here:

Calling from Toronto in February, Brian Kelley can be excused for thinking about summer.

“I played baseball growing up and all through college,” he said. “To go back and play music in baseball stadiums, that’s going to be a dream come true.”

In 2009, Kelley wrapped up his collegiate career at Belmont University in Nashville, Tenn. Did the left-handed pitcher have a specialty?

Florida Georgia Line, appearing Feb. 15 at Bankers Life Fieldhouse, has thrown figurative curveballs at the music industry since releasing a hip-hop remix of the song “Cruise” with St. Louis-based rapper Nelly last April. The song topped Billboard magazine’s country singles chart from April 20 to Aug. 24, making it the most popular country tune of the year.

Hubbard and Kelley also are ready to rock. Florida Georgia Line will contribute a Motley Crue cover to a tribute album being assembled by Nashville label executive Scott Borchetta.

“The music is awesome,” Kelley said of Motley Crue. “The stories are awesome. Their shows are epic. It’s just a legendary rock band, period.”

Kelley, who grew up in Florida in contrast to Hubbard’s Georgia roots, said the Single of the Year trophy means the most.

“We wrote ‘Cruise’ at a time when we were just trying to get a publishing deal so we could write songs and not have to do odds-and-ends jobs,” Kelley said.

Nashville traditionalists single out Florida Georgia Line as a leader in the “bro-country” movement, in which superficial lyrics based on pick-up trucks, beer and the weekend dominate most songs.

“Our fans are just so passionate and loyal,” he said. “Every time we put out music, they’re excited about it. We’re touring like crazy. They’re showing up, ready to party. We focus on those fans who are supporting our music and care about us.”

Florida Georgia Line supplied new music to its fans when releasing an expanded edition of debut album “Here’s to the Good Times” in November. Current single “This is How We Roll” includes a reference to “ballin’ 37 Nittos,” or driving high above the ground thanks to 37-inch tires manufactured by California-based company Nitto.

Hubbard and Kelley wrote the song with Luke Bryan, who makes a guest appearance on the track. Bryan, perhaps king of the “bro-country” sub-genre, will play two shows at Klipsch Music Center in August.

“He brings a lot of energy to the track and to the studio,” Kelley said of Bryan. “He’s one of our good buddies in the industry.”