RAVE REVIEWS FOR A ROCK STACK HIGH AS

After releasing his debut album A ROCK last Friday (9/4), Big Loud Records’ HARDY is on a roll this week, doubling down with two back-to-back high voltage performances yesterday (9/9) that showcased his skills as a dynamic, versatile Country entertainer.

Making his Late Show With Stephen Colbert debut, HARDY brought “AIN’T A BAD DAY” to their #PlayAtHome series with his full band in support. Against the background of a Nashville warehouse and a larger-than-life HARDY banner, the countrified apocalyptic anthem resonated heavily, charged up with electric sonics and a tangible, live show quality – watch “AIN’T A BAD DAY” here.

Continuing the celebration of A ROCK into last night, the ACM nominee treated fans to his HARDY Album Release Virtual Concert, a top-to-bottom spectacle performing every track live from a soundstage in Nashville. Surprising viewers, HARDY performed his Top 15 and climbing radio hit “ONE BEER” alongside collaborators Lauren Alaina and Devin Dawson, then immediately brought out Ashland Craft for the album’s only duet, “SO CLOSE.”

Hosted by VYE Live in partnership with Clair Global and PTP Live, the event garnered over 5,000 unique visitors and featured a wall of faces, with select fans joining in live from their living rooms across the country that HARDY could hear, see and interact with throughout his set. SiriusXM was the exclusive audio partner, airing the show simultaneously on radio airwaves nationwide; they will re-air the full virtual concert this Friday (9/11) at 12pm ET/11am CT. See photos from HARDY’s Album Release Virtual Concert here. 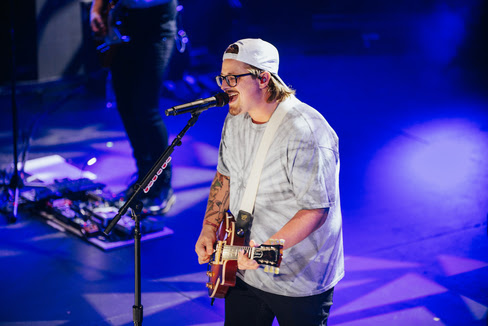 Billboard praises A ROCK as “one of the most self-assured full-length debut albums in years” and “an album that owes as much to AC/DC as George Jones,” while Rolling Stone hails the project for “celebrating the value of a good story.” Listen to it here.

On October 9, HARDY will return to the stage for Georgia’s Rome River Jam alongside Morgan Wallen, Riley Green and Jon Langston for an innovative live show that is going to be different than what we are used to, but fully in accordance with current health and safety guidelines. Taking cues from recent shows in the UK, the concert will implement socially distanced pods that hold six people at maximum limit, designated entry times, one-way traffic flow, a mask mandate and added security. For additional safety information and tickets, visit here.

KEEP UP WITH HARDY