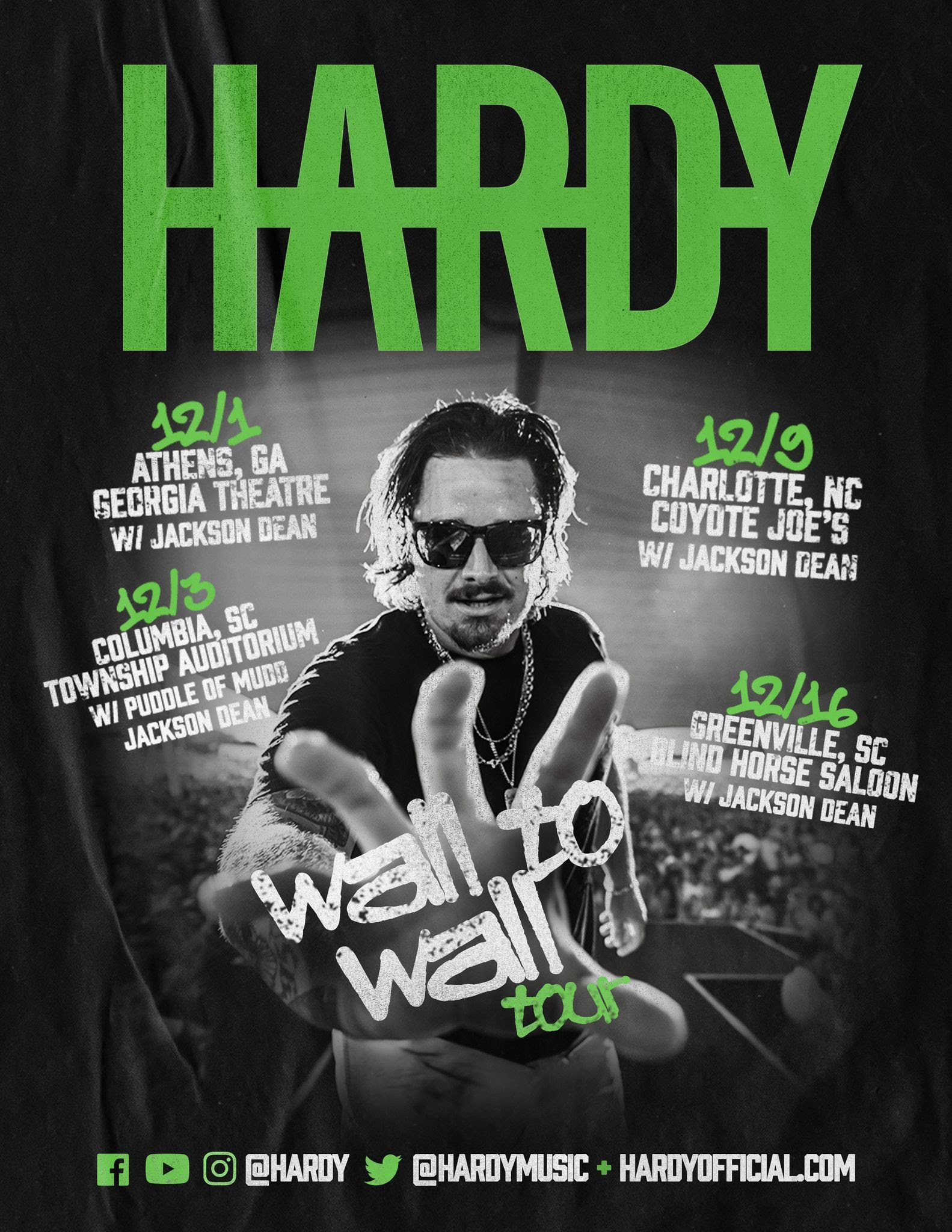 NASHVILLE, TENN. – Big Loud mold breaker HARDY is ready to headline, announcing today his Wall to Wall Tour launching December 1 in Athens, Ga. Joined by gravel-voiced newcomer Jackson Dean for the entirety of the winter run, the hard hitting double shot of country rockers will pack out famed venues across the southeast. In Columbia, S.C., “Blurry” originators Puddle of Mudd join the tour for one night only.

“I’m stoked to take this Wall to Wall Tour on the road,” HARDY says. “We’re hitting some cities and venues that I absolutely love; I’m happy to have Jackson out with me and honored that the guys from Puddle of Mudd are joining us in Columbia. It’s going to be a great time – a loud time – every night, and it’s just the beginning of what we have in store. See you out there.”

+ with Puddle of Mudd

Tickets go on sale this Friday, August 26 at 10 a.m. local time; fan club presale will be available starting Wednesday, August 24. For full tour dates through the end of 2022, click here.

American Songwriter puts it simply: “there aren’t many names as sizzling in country music these days as the one-word moniker: HARDY.” The 2022 ACM Songwriter of the Year will receive honors and perform this week at the 15th Annual ACM Honors ceremony at Nashville’s Ryman Auditorium (8/24). On tap, he continues touring on Morgan Wallen‘s sold out Dangerous Tour and partners with Busch Light for a trio of win-your-way-in, fan focused club shows in the Midwest.

Big Loud Records’ heavy hitter HARDY broke out with critically acclaimed 2020 debut album, A ROCK, “an album that owes as much to AC/DC as George Jones” and “one of the most self-assured full-length debut albums in years” (Billboard). The project joins countrified mixtape HIXTAPE VOL. 1 and most-recent HIXTAPE VOL. 2, as well as career-launching EPs THIS OLE BOY and WHERE TO FIND ME. HARDY is the 2022 ACM Songwriter of the Year and two-time AIMP Songwriter of the Year, additionally nominated for New Artist of the Year at the 2021 CMA Awards. One of CRS’ 2021 New Faces of Country Music, a two-time CMA Triple Play award recipient and a Vevo DSCVR artist, the pride of Philadelphia, Miss. has earned his reputation as “a breakout in the making” (HITS). HARDY has written 12 #1 singles since 2018, including his own chart-topping, double platinum-certified single “ONE BEER” feat. Lauren Alaina + Devin Dawson, and chart-topping Dierks Bentley + BRELAND collaboration, “Beers On Me.” Serving as direct support on Morgan Wallen’s Dangerous Tour now, HARDY has also opened for Jason Aldean, FGL, Chris Lane, Thomas Rhett, Cole Swindell and more.

Odenton, Maryland native Jackson Dean is a singer/songwriter known for his old school, gritty style of country. Mature beyond his years, Jackson has a daring and carefree spirit, having moved out at 18 years old to live in a cinderblock, concrete floor, one-room shack on the back of his grandfather’s property with no heat and no plumbing. Bringing that same sense of adventure to his songwriting, Jackson writes both independently and alongside outliers like Luke Dick, classic writers like Casey Beathard and everyone in between. Following the release of his debut collection JACKSON DEAN, Jackson continues to show people how real music can be with atmospheric, musically-forward album GREENBROKE out now via Big Machine Records. Featured on the soundtrack for Netflix’s The Ice Road and in an episode of Paramount Network’s Yellowstone, the stomping “Don’t Come Lookin’” is making its mark as his first single at country radio debuting at No. 39 on the Country Aircheck/Mediabase chart – the highest chart entry for an artist’s first single since 2015. Following an early career of local performances in his hometown, Jackson has joined bills with superstar acts like Toby Keith, Miranda Lambert, Brantley Gilbert, Kane Brown, Jake Owen, and Brothers Osborne. Hitting the road this summer for dates with Brooks & Dunn and Lee Brice, visit jacksondeanmusic.com for more information and upcoming tour dates.

ABOUT PUDDLE OF MUDD

Puddle of Mudd rise from the ashes with their sixth studio album in nearly a decade, entitled Welcome to Galvania. Formed in 1991, Puddle of Mudd has sold over seven million albums and has had a string of number-one singles, including the hits “Blurry,” “She Hates Me,” and “Famous.” The new album, Welcome to Galvania, was produced by Cameron Webb (Alkaline Trio, Disturbed, Motorhead). It also marks the band’s first full-length album since Volume 4: Songs in the Key of Love and Hate in 2009. “This album has been a long time coming. I’m just so happy to finally get it out there for my fans,” says Puddle of Mudd’s frontman, Wes Scantlin. “I hope the new music inspires my fans to live their lives. I’m just trying to crawl under people’s skin and help them through their life musically.” Scantlin has provided Puddle of Mudd with lead vocals and rhythm guitar since the band’s inception. The origins of the band’s name came from the Missouri River flooding, damaging their rehearsal space. Puddle of Mudd released their first major album, Come Clean, on August 28, 2001, which spawned the singles “Control” and “Blurry.” These hits propelled Puddle of Mudd to reach the No. 5 slot on the Billboard Hot 100 chart. This success led to the band venturing out on a full-scale European and American tour, hitting the road with Linkin Park, Stone Temple Pilots, and Staind. Come Clean reached triple platinum status in January of 2003. The subsequent album, Life on Display, was released in 2003 and reached gold status. They went on to release Famous in 2007. In 2009, they released Volume 4: Songs in the Key of Love and Hate. In 2011, the band released an album of cover songs, entitled Re:(disc)overed. Now, Puddle of Mudd is ready to return to the rock scene with their sixth studio album, Welcome to Galvania. Inking a deal with Pavement Entertainment, their new material is primed to reach longtime and new fans. “Sometimes in life you come across people who want to bring you down and rip apart your soul. Well, those days are gone,” says Scantlin. “I have surrounded myself with a great team of people. They believe in me and I believe in them. I’d like to thank each and every one of them for their hard work and perseverance. I’d also like to thank all of my fans for their patience. This is just the beginning. I have a lot more rock ‘n’ roll in me to share with the world!”

CONNECT WITH PUDDLE OF MUDD

For Puddle of Mudd