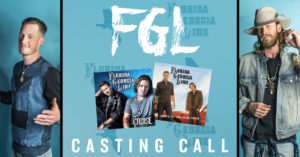 NASHVILLE, TN (May 12, 2017) – Reigniting the party vibes that had fans high on “Cruise,” FLORIDA GEORGIA LINE has launched a nationwide search for their next music video. Brian Kelley and Tyler Hubbard are inviting mimics to submit their best photo and/or video that depicts the superstar duo’s circa 2012 look.

Much has changed for FGL since “Cruise” shot them into the Country music stratosphere, including their unmistakable personal style. Starting out as a pair of unknown country boys, BK and Tyler have since thrived as they push the boundaries of both music and fashion.

Now, their ever-evolving flair will be on full display in an upcoming flashback video. Hopeful “doubles” can visit the special casting website and choose which of the FGL duo they resemble then submit up to three photos and/or videos as proof of their look-alike status. The very best will appear in FGL’s next music video.

FGL has continued to crush records as the first and only Country act to achieve RIAA’s DIAMOND certification (10 million copies sold) for their breakout smash “Cruise,” which holds the record for the longest #1 on Billboard’s Hot Country Songs chart and is the best-selling digital country single of all time (SoundScan).