On Thursday night (March 17), it was Florida Georgia Line‘s turn to take to the RodeoHouston stage, and the duo turned NRG Stadium into their own brand of country party during their 13-song set.

Brian Kelley and Tyler Hubbard opened their show with “It’z Just What We Do” and almost immediately went from the rotating stage to the dirt to interact with fans. “Round Here,” “Party People” and “Anything Goes” all made it into the first half of FGL’s concert.

“Texas, we have a little confession for you …,” the guys told the crowd, but rather than a heart-to-heart talk, the audience got Kelley and Hubbard’s latest single, “Confession.” The onstage screens filled with a purple, sparkly fog, and pillars of fire completed the ambiance. RodeoHouston’s artists have kept their sets to a minimum thus far in 2016, so the fire was certainly a new twist; leave it to Florida Georgia Line to turn up the heat!

Before playing “Dirt,” the duo asked the crowd, “Y’all ready to go to church on a Thursday night?” — a question met with a resounding yes. Kelley and Hubbard rolled into a spoken version of the song’s chorus, but not before telling the crowd how good it felt to be on “home dirt” after being on the road for so long.

“This Is How We Roll,” “Get Your Shine On” and “Cruise” completed Florida Georgia Line’s rodeo concert — but not without a nod to Thursday’s holiday: St. Patrick’s Day. The country stars embraced the celebration with green and yellow fireworks near the end of their set.

The crowd didn’t want the St. Patrick’s Day party to end, however. After FGL’s performance, many people headed to the rodeo’s Hideout to continue the celebration with a set from Cameran Nelson. The up-and-coming artist played songs from his newest album, Good Thing Going, and had plenty of revelers showing off their two-stepping skills. 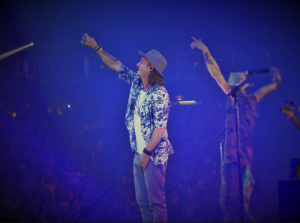