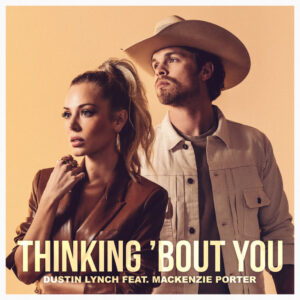 “MacKenzie and I are so honored to be embraced and lifted up by Country radio with this single,” shares Lynch. “Our genre has a rich tradition of duets that stand the test of time, and we can only hope to contribute to that list.”

LISTEN TO “THINKING ‘BOUT YOU”

AND WATCH THE OFFICIAL MUSIC VIDEO

Critics can’t stop thinking – or talking – ‘bout the power duet, with All Access praising, “The vocal chemistry between the two is undeniable throughout the track.” Recently spotlighted by The Tennessean as a “reflective tune that hears lost love reunite,” Billboard also just selected the memory-soaked stunner for a “Makin’ Tracks” feature and deemed it a “hooky new release.”

Stacking upcoming tour dates, excitement is building for updates on DUSTIN LYNCH POOL SITUATION: VEGAS expected soon. An experience brought to fans by Pollen, Lynch will host curated parties and a headliner show – alongside performances featuring guest artists Jordan Davis, HARDY, and DJ sets from Brandi Cyrus – on June 3-6, 2021. Information on ticket packages for the ultimate party of the summer can be found here.