In reaching #1, “Confession” follows in the footsteps of previous “Anything Goes” singles “Anything Goes,” “Sippin’ On Fire,” “Sun Daze,” and “Dirt.” FGL’s debut album produced chart-toppers in “Cruise,” “Get Your Shine On,” “Round Here,” and “Stay.” 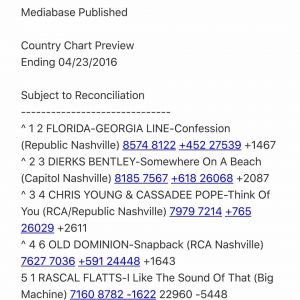 The only FGL single to miss #1 was “This Is How We Roll (featuring Luke Bryan),” a track from the re-issue of “Here’s To The Good Times.”

“Confession” seizes the Mediabase throne from Rascal Flatts’ “I Like The Sound Of That,” which slips to #5 after a single week on top.

Not simply the leader in Mediabase chart points, “Confession” also ranks as the Mediabase country panel’s most played and most heard song for the April 17-23 tracking week.

Positioned between the #1 “Confession” and #5 “I Like The Sound Of That” on this week’s chart are Dierks Bentley’s #2 “Somewhere On A Beach,” Chris Young & Cassadee Pope’s #3 “Think Of You,” and Old Dominion’s #4 “Snapback.”