Smith Hits The Open Road For Two-Week Run Of Shows In The U.S. 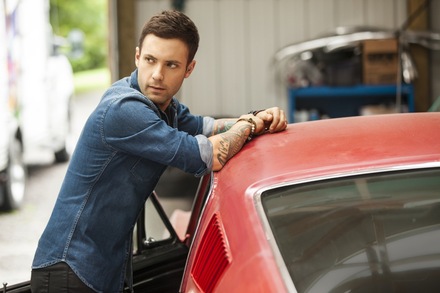 Nashville, Tenn. (Nov. 10, 2015) – Blaster Records/Big Loud Mountain recording artist and blockbuster vocalist Dallas Smith will double down with the worldwide premiere of the music video for his new single “Kids With Cars” exclusively across CMT and CMT Canada today (11/10). Taking fans on a nostalgic spin back through America’s car culture, the video has been selected for CMT’s “Artist Discovery” program and will be featured across CMT Pure, CMT.com, and CMT’s mobile app. In tandem, the video will debut on all CMT Canada platforms with heavy rotation on air and online. Following the 24-hour premiere, the video will be available across all other digital partners. Watch the video, here: http://www.DallasSmith.CMT.com.  Canada: http://www.cmt.ca/artist/dallas-smith/video/dallas-smith-kids-cars

Directed by award-winning filmmaker Nigel Dick (“Sweet Child O’ Mine,” “Welcome To The Jungle,” “Baby One More Time”), Smith takes on the role of Chief Mechanic at an auto repair shop, where his customers range from a free-spirited crowd of teens packed into a two-door Civic, to a group of cheerleaders in a Cavalier convertible, to a young couple on a date in a jet-black Mustang. Capturing Smith’s real-life love for classic cars, the video transports viewers back to a time when all that mattered was having a cool ride.

“It takes you back to the first car you ever owned in high school, to when you hung out in the parking lot. You had your little group of Civics and imports over here, and you had the guys with the classic cars over there. And then there were the girls with the brand-new Mustangs. All of the different social groups were based upon what you drove,” shares Dallas Smith.

“Kids With Cars,” is the lead single from Smith’s EP KIDS WITH CARS and was recently featured in Billboard’s “Tomorrow’s Hits.” The revving title track has garnered early airplay on 25+ contemporary Country stations including iHeart Radio’s nationally-syndicated Premium Choice programming and first started spinning on SiriusXM’s “The Highway.” Radio trade All Access lauds the track as a “very upbeat, nostalgic, contemporary Country single that you’ll want to show some love.”

Rapidly growing his fan base in the U.S., Smith was named as an artist with “quite the following” by #CMChat who predicts that he will “be playing on more main stages in 2016.” Rolling Stone Country praised that, “Dallas dialed up the amplified noise” during his set at the Route 91 Harvest Music Festival in Las Vegas, marking him as “one of the weekend’s most familiar faces.” The seasoned performer has also been on The Huffington Post’s radar as one of 15 Country Artists To Watch in 2015, highlighting his ability to draw crowds of more than 25,000 fans.

Armed with an arena-sized voice, Smith has amassed international appeal since making his American country debut with the infectious single “Tippin’ Point” and dominating the Canadian Country charts with songs like “Lifted” and multi-week #1 hit “Wastin’ Gas.” The Vancouver, British Columbia native is the only Canadian male country artist to spend multiple weeks at the top of the Country Airplay Chart in the Nielsen BDS era for single “Wastin’ Gas.” Piling on the accolades, Smith is the 2015 JUNO Award winner for Country Album of the Year (LIFTED), and the CCMA Award winner for Album of the Year (LIFTED).