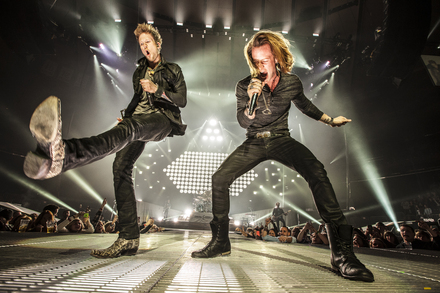 NASHVILLE, TN (April 6, 2015) – Florida Georgia Line will lead into the 50th Annual ACM Awards with a slew of major media appearances. The superstar duo will kick off the blitz tomorrow (4/7) with an appearance on CBS’ The Talk, airing at 2p ET / 1p PT/CT. Then, FGL will take on FOX’s American Idol this Wednesday (4/8), airing at 8p/7p CT, for a special mentoring session with the contestants along with their debut television performance of the scorching new single “Sippin On Fire.” FGL will also stop by CBS’ Entertainment Tonight for an upcoming segment.

The Top 15-and-rising “Sippin’ On Fire” is the third single from FGL’s chart-topping, GOLD-certified sophomore album ANYTHING GOES (Republic Nashville) and follows the back-to-back #1 hits “Sun Daze” and “Dirt.”