Country has been on a collision course with hip-hop for the last few years, and Mr. Shelton’s embrace of it, however fleeting, was an indicator that what was afoot was more than a flirtation. Rather, it reflected a change in country music’s DNA, and was also a harbinger of its more open-eared future.

There has been no escaping the sonic shifts that have been reconfiguring country music of late. Already the country-rap crossover — collaborations with rappers, hip-hop slang sneaking into songs — has a partner in the recent spate of country songs produced with flourishes of electronic music.

The floodgates are opening because of generational shifts in Nashville and demographic shifts in listenership that have shown that country can no longer afford to be walled off from the rest of the world, and has to reimagine itself as a result. That’s meant Luke Bryan’s spring break anthems, Lady Antebellum’s soft rock, Jason Aldean’s fight songs, and also any number of songs — by Mr. Bryan, Mr. Aldean, Florida Georgia Line and more — that incorporate rapping, and songs by Keith Urban, Jerrod Niemann and Jake Owen, among others, that nod to the dance floor.

Country is likely as broadly successful as it’s ever been — it is the most popular radio format — but as it becomes more widely embraced, it struggles mightily to retain its core values. A genre saddled with moral superiority and social inferiority, it wants to police its borders even as what’s inside is evolving radically. There is a widening and not fully reconciled distinction between country as a genre (i.e., what gets played on the radio) and country as a set of lived practices (i.e., what country folks do).

“So many of our artists came from small rural backgrounds, and they never really escaped the boundaries of their backgrounds until they hit it big. A lot of the tenor, the flavor came from where they came from,” said Mike Dungan, chairman and chief executive of Universal Music Group Nashville. “Much of the innocence of that narrow view of the world has been infringed.”

What that means for country is a generation of stars — mostly in their mid-late 30s, old enough to have grown up with hip-hop as a fact of life, even in the small towns they hail from, who think nothing of sprinkling a little bit of it into their music.

“Nobody grew up more country than me,” said Mr. Bryan, maybe the genre’s biggest star of the moment, “and we listened to Eazy-E and 2 Live Crew.”

Mr. Bryan’s climb to the top has been a long one, and he developed his fan base playing not just in honky-tonks, but also at college parties and spring break ragers. “We watched what the D.J. played afterward,” he said. “Right when I got offstage, they started playing Juvenile and Outkast.”

This natural hybridity has made for a new category of stars — Mr. Bryan, Jason Aldean, and most notably, Florida Georgia Line, whose hip-hop-inflected hit “Cruise” was one of last year’s dominant pop singles, helped along by a remix with the rapper Nelly, who was also part of the other significant hip-hop-country crossover record of the last decade — “Over and Over,” the 2004 Tim McGraw duet. (Florida Georgia Line will tour minor league baseball stadiums with Nelly this summer.)

“Jason and Luke busted down the doors,” said Tyler Hubbard of Florida Georgia Line. “This sound is part of the evolution of country music.

To read the full article visit: 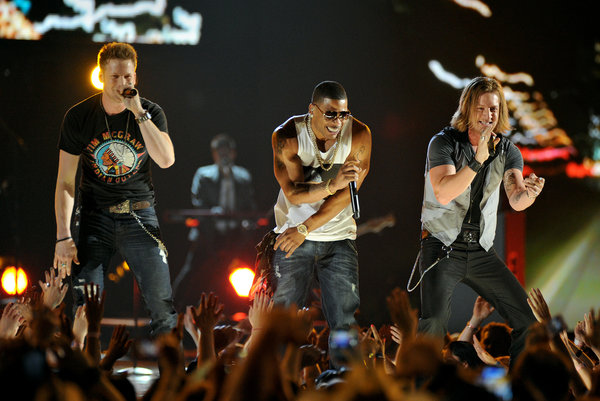