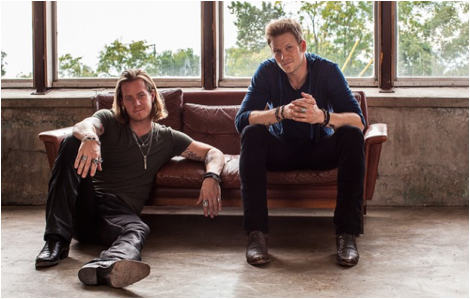 One night, they’re winning awards and rocking out for a live nationwide television audience. The next, they’re taping an episode of “Ellen.” And the next, they’re off for a string of shows in Canada.

Such is the life of Brian Kelley and Tyler Hubbard, better known as country-pop sensation Florida Georgia Line. The duo has had anything but a slow rise, shooting to fame with its 2012 single “Cruise” and continuing to gain popularity with a slew of No. 1 hits that has its debut record, “Here’s to the Good Times,” remaining at No. 4 (at press time) on the Billboard Country Albums chart. The album has been on the charts for a whopping 70 weeks.

“We’ve always had big dreams and high hopes and have always worked as hard as we can, always envisioned playing arenas and stadiums. But you just never know. A lot of things have to happen, and a lot of stars have to align for things to come together. But we’re just very humbled. It just makes us want to work that much harder.”

Behind the success of “Cruise,” Florida Georgia Line had a decent haul of awards last year, nabbing honors from the Academy of Country Music, the Country Music Association, Country Music Television and American Music Awards.

On April 6 in Las Vegas, Florida Georgia Line started what looks to be an award-filled 2014 when it repeated as the ACM Vocal Duo of the Year. But the guys weren’t at the awards show at the MGM Grand; they were busy headlining the ACM Fan Jam down the strip at Mandalay Bay.

In addition to performing a couple numbers for the awards show — including a pyrotechnics-filled performance of its hit “This Is How We Roll” with Luke Bryan, complete with BMX riders — the duo put on a full concert following the broadcast.

“We’re just blown away; that was a huge night for us,” Kelley said. “It was a busy night, but man, it’s always fun. We like being busy, we hate sitting around. So it was a good time.”

THE SHOW will be the first in Hawaii for the duo, who met as students at Belmont University in Nashville, Tenn., and have played together since 2009.

“We have a thing going around our band, our crew, everybody: the countdown to Hawaii,” said Kelley, a native of Ormond Beach, Fla. (Hubbard hails from Monroe, Ga.) “It begun when we booked it, and we are getting so close.

“It’s a dream to even go there. And to play music is just a cherry on top. We’re going to soak in every second, do some surfing and hanging out, soak in the culture.”

The brief Hawaii vacation comes at a good time for Florida Georgia Line. It follows a short Canadian tour where they’ll play eight shows in 11 days. And once they leave the islands, they are back on a cross-country whirlwind, with nonstop touring — mostly as part of Jason Aldean’s Burn It Down Tour — through October.

But you won’t hear Kelley complaining about the rigors of touring.

“We love what we do,” he said. “Even on days when you’re tired, you’re worn out, you’re exhausted, annoyed, whatever it may be — the fact that we get to go up and play a show, play country music every night for the most amazing fans, it’s just awesome. We love it. We’re addicted to it.”

At a “Summer Series” in June, Florida Georgia Line will perform at a handful of minor-league ballparks with rapper Nelly, who they worked with for a remix of “Cruise.” That popular remix helped the song become the best-selling digital country single of all time, with over 6.8 million downloads in the U.S. alone, according to SoundScan.

“Cruise” reached No. 1 on Billboard’s Country Airplay chart in December 2012, with the Nelly remix later peaking at No. 4 on the Billboard Hot 100.

The successful collaboration came about because the two artists are label mates at Universal Republic Records.

“For us it was a no-brainer because we’ve been such big fans of him,” Kelley said. “He’s just the coolest dude. He’s kind of become like a brother/uncle figure to us. We’ve developed a lifelong friendship.”

“HERE’S TO THE GOOD TIMES” is just that, a salute to beautiful women, fun-filled weekends and endless parties (with a little bit of Fireball Cinnamon Whisky, the group’s favorite drink). Of course, not every song is a party anthem — a fourth hit off the album, “Stay,” is the standard I’m-sorry-please-come-back ballad that shows the duo’s sensitive side.

But Florida Georgia Line’s current rising single, “This Is How We Roll,” is more of that party vibe, the first lines of which tell a little about the group’s varying taste in music:

The mixtape’s got a little Hank, little Drake/

A little something bumping, thump, thumping on the wheel ride …

“We love everything,” Kelley said. “Every genre you can probably think of, we like. Garth Brooks is a huge influence on me, and Tim McGraw. Outside of country music, we grew up listening to Lil Wayne, anything from Alabama to Lynyrd Skynyrd to Eminem to Aerosmith. Everybody.”

Factor in Kelley and Hubbard’s good looks and ability to cross genres, and they’ve become one of the biggest country duos since Brooks & Dunn.

The two graced the cover of the most recent edition of USA Weekend, with a story focusing on how they’ve used their fame to help others. Florida Georgia Line is the face of the third annual Outnumber Hunger campaign, with their image appearing on various General Mills products with codes that customers can enter online. For each code, General Mills will donate

In between tour dates, Kelley and Hubbard are working on their sophomore album, reconnecting with producer Joey Moi, who worked with them on their debut album, and taking inspiration from their hectic year to make a record Kelley promises will keep the party going.

“It feels good to be back in the studio,” he said. “‘Here’s to the Good Times,’ we had some of the best times of our lives making that, so I know that this record is going to be the same thing.

“It’s just fun getting new music out to our fans. It’s the best feeling in the world, taking it out on the road and playing it for everybody.”